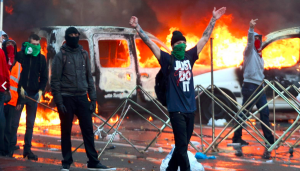 The mainstream left, since President Trump’s election, would be better described as the alt-left. Even previously reasonable citizens have jumped on the crazy bus. These people acted normally when President Obama was holding sway, signing constitution-adverse executive orders and playing hooky to hit the golf links. But now that the tables have turned, the alt-left has reduced itself into a saliva-slinging frenzy.

I was surprised when none of these Saul Alinsky wannabes didn’t let a single sigh escape their collective mandibles when it was shown that Hillary effectively stole her nomination by rigging everything against Bernie Sanders in collusion with the DNC and Debbie Wasserman Schultz.

But she lost. Forget the left and right-coasters; fly-over America spoke.  The electoral college has been much bemoaned. Middle America want its jobs back. They want off Obama food stamps and free cell phones. They want their dignity.

The problem now is that the activists (many professional activists paid by George Soros) are still looking for that free meal ticket. Supposedly from the party and philosophy of “inclusiveness, diversity, and respect for the rights of others,” they feel that it is OK to destroy public property and physically beat the crap out of people that don’t march to their brown-shirt tune.

When All Else Rails, Resort to Vulgarity

Conservatives may be a basket of deplorables but the Anti-Trumpers on the left enjoy getting down in the the pit of verbal excrement and have a good roll.

Case in point: Mark Roberts, an Oregon independent congressional candidate, is catching fire after calling the First Lady a “hoebag” during a bizarre series of Tweets whilst feuding with Republican House Majority Leader Kevin McCarthy. One must wonder if he kisses his mother with that foul mouth.

Tthe first lady’s spokesperson Stephanie Grisham said in a statement to CNN, “This is just more hypocritical intolerance from those who oppose her husband’s administration. To say such ugly words about a mother, wife and our First Lady is not just a pathetic attempt at getting himself in the news, it is disturbing and despicable.”

What Can be Done in Government?

Unfortunately, not much. The geriatric Democrat party is still being marionette-string-controlled by the likes of Pelosi and God-help-me feces-for-brains Chuck Schumer. The average Democrat seems now willing to toss them on the dung-hill of historical have-beens but there isn’t really any new talent to replace them. These guys have been around since the Democrats sponsored the Ku Klux Klan and their heels are dug in.

Face it, they are mad, mad, mad. The leftists don’t want jobs. They don’t want their neighbors to have jobs. They are not interested in safe neighborhoods. They don’t care about social justice unless it is their particular flavor (otherwise they will beat your ass, especially if you are wearing a “Make America Great” hat). What they really want is more free stuff, paid for by someone else. Their new rallying cry is, “Socialism now! Everything is for free!”

Wake up America. Have some self-respect, and for crying out loud, pull up your britches, yo. Nobody wants to see your ghetto boxers.

4 Replies to “Why is the Democrat Left so Angry?”