This morning we awake to yet another chapter in the unfolding global melodrama between President Trump and Kim Jong Un, the unhinged dictator of the hermit kingdom.

Kim Jong Un, or the “Pillsbury Doughboy with a really, really bad haircut” has been very vocal about his plans for the U.S. unincorporated United States territory of Guam. Specifically, he has been threatening to fire four missiles in order to surround the U.S. territory of Guam in “enveloping fire.”

Undoubtedly this is a trick right out of his father Kim Jong-il’s playbook. Rattle that rusty old saber, make a few headlines, and sit back and wait for humanitarian food aid.

Historically, US presidents back down from North Korean threats. For example, as recently as 2009 the Obama administration said that it will not enforce a UN resolution allowing the interdiction of North Korea’s shipping when suspected of illegal arms traffic.  Instead, the US will ask permission to inspect, and retreat when refused. This weakness did not bode well for Obama’s legacy.

Donald Trump is the New Sheriff in Town

No doubt Kim Jong Un imagined this tried and true strategy would keep working with his threat to attack Guam as he sipped 100-year old whiskey and cavorted with his concubines. However he was ill-prepared to hear President Trump warn Pyongyang last week that the U.S. military was “locked and loaded” and could engulf the North in “fire and fury.”

Kim’s response after having a look at a military plan presented to him by his senior officers was telling. He seems to have had an uh-oh moment and realized he wasn’t dealing with Obama anymore. This isn’t the former guy that spends his working hours playing on the golf course, this is the guy that owns the golf course.

Kim is now in full backpedaling mode and says he has resolved not to launch the attack on Guam just yet but instead advised the U.S. “to take into full account” whether the current standoff was to its benefit. He also said it was incumbent on the U.S. to “stop at once arrogant provocations against the DPRK and unilateral demands and not provoke it any longer.”

He went on to say, “If the Yankees persist in their extremely dangerous reckless actions on the Korean Peninsula and in its vicinity, testing the self-restraint of the DPRK, the [North] will make an important decision as it already declared.”

The recent UN-mandated sanctions against North Korea are likely a factor figuring into Kim’s come-to-Jesus moment. Although he usually scoffs at sanctions, this time even Russia and China committed.

China is the real surprise. It is Kim’s largest trading partner and cheerleader. The Chinese customs agency specified that on Monday it will cease processing imports of North Korean coal, iron and lead ores and fish at midnight on September 5.

The latest sanctions, considering all the nations that are participating, are expected to block exports valued at more than $1 billion. This is significant since total exports are valued at $3 billion last year.

Over the years Kim has used various means (other than ruthless treatment and starvation of his countrymen) to keep his grip on power. One of these is the state propaganda of the Kim Jong Un as a mystical figure. Perhaps he can use some of that mojo to channel his father and ask for advice. 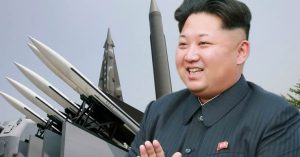 North Korea has been ramping up their ballistic missile program at an ever-increasing rate. Not only has it been launching more missiles than ever before,  it has begun concentrating on longer distances (see the graphic below). This seems to be Kim Jong Un’s pet project, allocating more and more money to the program while more and more of the citizens starve. Clearly, this man is irrational (and it’s not just that goofy haircut). 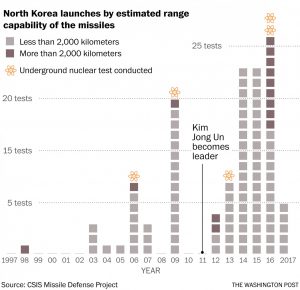 The missile and payload arsenal has been growing rapidly. The most recent nuclear test took place on last September 9th and yielded an impressive 30 kilotons which is double the force of the “Little Boy” bomb which was dropped on Hiroshima, Japan. It has also developed a bomb that is small enough to fit inside the nose cone of one of it’s missiles.

It’s missiles include the following:

One of Kim’s trademark moves is saber-rattling. The problem is that his particular method involves not only hysterical and low-brow ineffectual insults (for example, “Obama always goes reckless in words and deeds like a monkey in a tropical forest.“) but also action.

This just goes to show that pundits are wrong when they compare Kim to Vladimir Putin. Yes, they are both cold-hearted tyrants but where Putin is an experienced thug Kim is still just a dangerous kid, paranoid rather than adventurous.

The graphic above shows how quickly the program has accelerated since Kim took over from his late father. In particular, Kim Jong Un has pledged to deliver long-range missiles capable of striking U.S. cities. Although President Obama basically gave him a pass and let it go. To his credit, he did employ cyber and electronic measures but the results were minimal. A maniac like Kim simply doesn’t respect any non-physical measures.

It remains to be seen how President Trump will handle the situation.Just before the inauguration of Trump he seemed to taunt Pyongyang in a Tweet declaring that North Korea’s plan for building intercontinental ballistic missiles “won’t happen.”

Did he over-speak or will he put his money where his Tweet is? Time will tell but judging from his propensity to honor his campaign promises, Kim would do well to tread softly. He might find himself receiving a prostate exam with the tip of Trump’s boot. In a battle of nerves, Trump will win.

The Sheer Lunacy that is Kim Jong Un

There is a reason North Korea is often referred to as the “hermit kingdom.” Very few can leave and nobody except religious missionaries and undercover photographers want to go there. This is national sovereignty on steroids.

One of the ways that Kim keeps his subjects loyal and perhaps even worshipful is through propaganda that showcases his lunacy. He claims to be an expert mountain-climber. Can you imagine? He casually scaled the 9000-foot high Mt. Paektu outfitted in only an overcoat and and leather dress shoes. Before sunrise!

Quite a sailor! At age nine he  raced the chief executive of a foreign yacht company visiting North Korea and “won sensationally.” He could drive a car by the age of three. Look out NASCAR!

He was born on Mt Paekdu, the most sacred mountain, in a log cabin. This cosmic delivery caused rainbows to appear, a bright star to shoot through the sky, and (oh my) the seasons immediately swapped winter for spring. Kind of makes the three wise men a bit lame. The truth is that he was born in a guerrilla camp in Russia.

He invented the hamburger, could speak like an orator at age three, and wrote 1500 books and six full operas between classes at university.

Clearly, we don’t need this bonehead to have his finger on the big red button.

That is really the question, isn’t it? He is either off in the head or clever. Not only is his position with the U.S. wavering, now his position with South Korea is in flux. He has recently called the South “incompetent.” Excuse me but which economy is vibrant and which is in the proverbial toilet?

Since his meeting with President Trump Kim’s has shown some intent to denuclearize. He has shipped some G.I. remains home. Either he continues to make good on his word or he faces further sanctions and continued ostracization from the civilized world.

What is your favorite race distance?