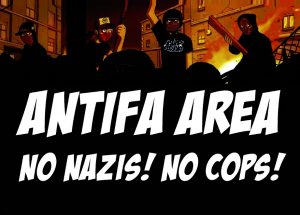 While there have always been fringe political groups, they are much more obvious today due to the internet, and of course, 24/7 cable news coverage. The range and scope of the organization of these groups on an internal level varies widely. Many are grass-roots groups that are self-funded; others are bankrolled from external sources that set the agenda to some extent and even issue paychecks to demonstrators (George Soros comes to mind).

Antifa has been Garnering Attention Lately

The Antifa moniker is shorthand for Anti-Fascism. The original movement began in Europe in the 1920s. Notably, Benito Mussolini’s propaganda machine used the term anti-fascist to label their opponents.

Anti-fascist groups also rose up to counter the Nazis such as the Red Front Fighter’s League. As you might infer from the term “Red” they were organized by the Communist party.

The political takeaway from these early anti-fascist groups is that they were resisting truly repressive regimes.

The current incarnation of Antifa in the United States is a bit different. Resisting a diplomatically-elected president such as Trump (or Clinton if that had of transpired), neither fascist by the way, is a bit of a stretch from the original intent.

www.thenation.com explains it like this,  “Antifa combines radical left-wing and anarchist politics, revulsion at racists, sexists, homophobes, anti-Semites, and Islamophobes, with the international anti-fascist culture of taking the streets and physically confronting the brownshirts of white supremacy, whoever they may be.”

Their current target is Trump although none of the above-mentioned terms actually fit him or his politics. Rather, it would seem that members of this organization (and others) are being used as dupes. Is Antifa Going off Message?

Despite all their claims, they talk the talk but fall short of walking the walk. Recently, on Aug. 4, 2018, Paul Welch took the American flag with him when he went to Portland to oppose a right-wing rally being held at the Tom McCall Waterfront Park.

Sounds patriotic as apple pie, right? Standing up for fundamentalist anti-stormtrooper government types. But not for the thugs as he said two people dressed in black and covering their faces (did we mention cowards covering their faces?) approached him and demanded he give them the “fascist symbol” he was carrying. When he refused, the Antifa duo tried to rip the flag from his hands.

Another masked counter-protester then approached Welch and began striking him from behind with an unidentified weapon concealed in black fabric.

“It strikes me as the worst sort of political theater,” Welch said of what happened to him. “It’s kind of like you’re playing into your opponent’s hand when you do that sort of thing. That’s not what I was there for.”

Effie Baum, a spokesperson with Popular Mobilization, a group that helped organize the counter-protest at City Hall, declined to comment.

Of course Effie, because you are covering for a bunch of cowards with political Napoleonic complexes. Who live in their parent’s basements. And stuff their gobs with Cheetos. When they are not chasing Pokemon with their establishment iPhones. Please.

At least three people were hospitalized after clashes between right-wing demonstrators and Antifa protesters. Anger after the fact was largely directed at Portland police, who used “less-lethal” riot-control weapons.

Is there an Antifa Connection with Obama’s Shadow Government?

What is a shadow government? In general, it consists of groups and individuals who exert some degree of control over the official government. The groups may include the Council on Foreign Relations (CFR), the Tri- lateral Commission, the Bilderbergers, the Federal Reserve, the World Bank, or the International Monetary Fund. The liberal mainstream media is certainly involved.

The individuals involved are the un-elected Obama era bureaucrats littered throughout the federal government. The judiciary and certain levels of state government are also involved. Undoubtedly many of these individuals (who wield quite a bit of power) are still loyal to Obama and his liberal policies.

Does Obama give them direct marching orders? That is unclear but to think so might be a bit too conspiracy theory-ish. However it’s no secret that he has remained very active politically since he left the White House and he is certainly sending out signals.

Is the failed Obama legacy the reason he just can’t accept the fact that he is not in charge anymore? It seems that this might be at least part of the reason. He is still trying to make his mark.

Now for the Antifa connection. It is extremely doubtful that the shadow government is directly pulling their strings. But the bottom line is that some of their goals coincide. In particular, foiling and if possible deposing President Trump. One way or another, they are marching in lockstep.

Many Democrat Congress members seem to have abandoned doing the nation’s business in order to focus almost full-time on taking Trump down. For example, Elizabeth “Pocahantas” Warren, Nancy Pelosi and Chuck Schumer.

The shadow government takes their cues from these folks. In a loose way the end result is a very real coordinated resistance effort against Trump and his administration.

The bottom line is that all this is very bad for the American people. Their interests are not being served. The Trump election was a mandate for the changes he ran on. The problem is that the Democrats are resisting all these changes because it threatens their lofty positions in society.

Kelly R. Smith is an Air Force veteran and was a commercial carpenter for 20 years before returning to night school at the University of Houston where he earned a Bachelor’s Degree in Computer Science. After working at NASA for a few years, he went on to develop software for the transportation and financial and energy trading industries. He has been writing, in one capacity or another, since he could hold a pencil. As a freelance writer now, he specializes in producing articles and blog content for a variety of clients. His personal blog is at I Can Fix Up My Home Blog where he muses on many different topics.

Do your home have a gas or electric stove?