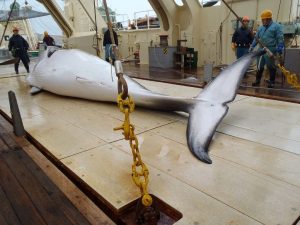 The Japanese are known for all manner of odd things — quirky cartoons, schoolgirl fetishes, and more. But by far the most curious is their tradition of slaughtering whales. Certainly the Japanese consume their fair share of seafood, but their whale meat consumption is way down since the aftermath of WWII so it hardly justifies their current hunting tradition.

What is the Japanese Fascination with Slaughtering Whales?

So why do they do it? Just this year they indulged in an annual Antarctic hunt that killed more than 300 of the mammals. It’s not for the meat and it is probably not for perfume (ambergris is produced by sperm whales and valued as an ingredient for women’s perfume for some reason).

No, the Japanese Fisheries Agency says the annual slaughter is really, “research for the purpose of studying the ecological system in the Antarctic Sea.”

Wow, didn’t see that coming. But then hey! I’m not a highly-paid Japanese press agent, right?

According to Yahoo News,  “Under the International Whaling Commission (IWC), to which Japan is a signatory, there has been a moratorium on hunting whales since 1986. Tokyo exploits a loophole allowing whales to be killed for ‘scientific research’ and claims it is trying to prove the population is large enough to sustain a return to commercial hunting.”

Maybe it’s just me, but that sounds like crappola in all its glorious splendor.

The History and Future of Whales Slaughtered by Japan

Te Japan Whaling Association to have begun around the 12th century However, Japanese whaling carried outon an industrial scale began in the 1890s when Japan started to participate in the modern whaling industry, at that time an industry in which many countries participated. Japanese whaling activities historically have extended far beyond Japanese territorial waters and even into whale sanctuaries protected by other countries. So nothing about their behavior is benign or even scientific and it is not in the realm of national sovereignty, it’s an international issue.

They also go so far as to claim that opposing their practices has nothing to do with being green. Ironically, they call their activities “capture surveys.”

Today, Japan is on board with Norway’s arguments on its own whaling activities. The thin argument is that it’s entitled to continue whaling because of the place whaling holds in its cultural heritage, according to the Ministry of Foreign Affairs of Japan. The whale meat from these hunts is consistently sold in shops and restaurants, which negates the “scientific” justification. To take the charade further, it is showcased at an annual food festival that, in some cases, features the butchering of a whale for onlookers.

As far as the future is concerned, Japan claims that as it is simply conducting ongoing research on whale maturation. It affirms that in the absence of “verified” non-lethal sampling methods, whales would continue to be slaughtered until the feasibility of non-lethal techniques is established. It seems that the motto of the Japanese whale slaughtering industry is, “We must eliminate them to find out how to conserve them.” That sounds like Nancy Pelosi, also a windbag.

6 Replies to “Japan Slaughters Over 300 Whales”