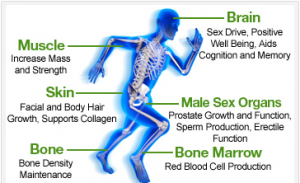 Some effects of testosterone.

Regardless of what we might think of transgender bathroom policies or how gender-shifters should be affected by many other social issues, sport is a particularly sticky area. Sports performance is indeed affected by hormones, muscular structure, heat tolerance, and even height.

It’s no secret that this gender issue is huge in the Olympics. In particular, testosterone levels in women, transgender or natural, affects performance. Take the 25-year-old South African woman Caster Semenya for example. She is a natural woman but has an intersex condition. This means she possesses the anatomical sex characteristics of both males and females.

By definition she is hyperandrogenous. Her body provides much higher levels of testosterone than the majority of other female athletes. It follows that this builds greater muscle mass and bone mass which permits her to run faster and train harder with fewer sports injuries.

Should She Compete against Men or Women?

This introduces a moral dilemma. Semenya dominates the 800 meters. Certainly many factors allow her to do this but it is irrefutable that her higher testosterone level gives her a clear advantage. In fact she is built like a man—broad shoulders, narrow hips, very muscular, and even a masculine jawline.

This brings us to the moral question; if her competitors took testosterone supplements in order to even the field it would be considered doping. Semenya isn’t doping but does she have an unfair advantage because of her condition? Since her testosterone is abnormally high for a woman, more like a man, should she compete against them instead?

To address that question, at one point track’s governing body, the IAAF, placed a ceiling on testosterone levels in female athletes. When that happened her performance came somewhat down to competitive levels and the common speculation was that she began medically suppressing her testosterone production in order to meet the requirement.

Since the IAAF removed the ceiling she has become virtually unbeatable once again. Depending on one’s personal outlook, it’s easy to draw a conclusion about what is “fair” and what regulations should be in place.

Recently, a transgender wrestler named Mack Beggs from Euless Trinity High School has been easily dominating the girl’s field at a competition at the Berry Center in the Cypress-Fairbanks school district.

Beggs was a girl but is now a transgender boy taking testosterone. Ironically, he wanted to compete against other boys but the University Interscholastic League rules force Beggs to compete as a girl instead. If that’s not a case against illogical wrongheadedness, what is? Once again testosterone is a huge factor. The really sad thing is that some of those testosterone-lacking girls were probably hoping for a sports scholarship.

So, what’s right and what’s wrong? Where should the lines be drawn? Each of us has to decide for ourselves.

Update 02/28/20: A Missouri state legislator has introduced a bill that would ban transgender high-school students from competing on teams that do not match up their original biological sex. Speaking at a state education hearing on Tuesday, GOP State Sen. Cindy O’Laughlin said, “It is a known biological fact that males are born with categorically superior strength, speed and endurance. It has nothing to do with any other issue than trying to create a fair playing field.”

One Reply to “Do Transgender Athletes Have an Unfair Advantage?”